Last Saturday, my granddaughter (5) and I went to the Vigil honoring Tina Fontaine to honor the death of this young Indigenous girl of 15 years old. With sadness for my granddaughter and outrage for me.

It was a very challenging decision to expose her to this painful reality at such a young age, but how else could I introduce her to the damage caused by colonialism and racism, in a way that she could relate? 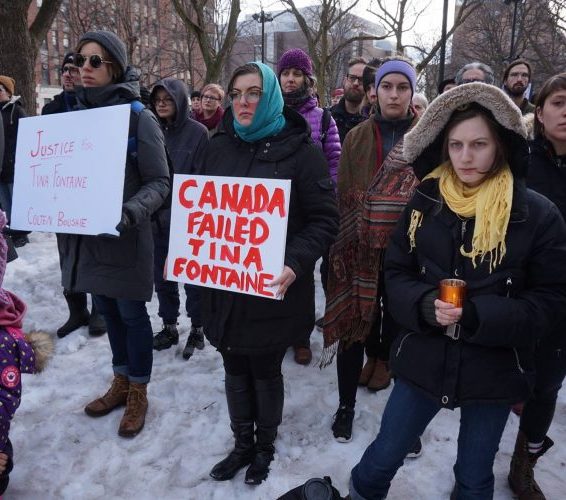 As we were leaving, she asked me, “When we’ll be home, will you tell me how she died?”

That was not a question I had expected. It was not an answer that I knew how to deal with. So to make sure that both of us would be able to process this difficult moment with loving kindness, I told her as we prepared an altar for Tina.

Here’s more reference I believe could be helpful on the topic.

We can’t blame our sorrow solely on circumstantial evidence or failing systems. We must call to account the angry beasts of racism, sexism, patriarchy, misogyny, capitalism and colonization that have allowed the devaluation of Indigenous women and girls.

These failing systems are rooted in deficiency models, designed around solutions aimed at “fixing” Indigenous “problems.” They are not based on the aspirations of Indigenous peoples and what brings wellness to individuals, families, communities and nations.

Imagining a Better Future: An Introduction to Teaching and Learning about Settler Colonialism in Canada

A lot of people in Canada take offence to being called “settlers” even though the term is not derogatory. Being a settler means that you are non-Indigenous and that you or your ancestors came and settled in a land that had been inhabited by Indigenous people (think: Australia, New Zealand, South Africa, etc.). However, it is important to recognize that while the term is not derogatory, it can often be very difficult to hear. Many people, particularly when first learning about the subject of settler colonialism, have strong and negative reactions to it. Andrea recalls yelling at the person who first called her a settler (thankfully Emma forgave me!), and Sarah recalls feeling like the rug had been ripped out from under her.  Most of us like to think that we are good people, and being told that we’re complicit in a colonial project can be emotionally wrenching. So we would like to encourage those who are interested in learning about this subject to make space for their feelings, recognizing them without judgement, and, whenever possible, to extend the same consideration to others. This is not to suggest that racist behaviour is acceptable under any circumstances, but, rather, that each person is on their own journey. We embrace the philosophy of love as political resistance whenever possible. However, part of this radical love is being open to learning and growing, even when it is painful.