why don’t you get over it?

After the Flashmob and my encounter with Nakuset, I saw myself searching for more first hand stories, studies made by Indigenous scholars, and becoming way more alert to what was happening at the level of the National Centre for Truth and Reconciliation. Scrolling through the social media, I started following various discussions and paying a lot more attention to who was telling what, how it was said, what were the responses, and where it was leading. As a result, I noticed that I was updating my vocabulary and worldview. I was more at ease with my own discomfort when meeting the Other. The many faces and voices and genders and realities and beliefs and aspirations of these others, which colonialism had tried to put in one box, a very narrow one, labelled with the most discriminatory names, to secure his domination over them, and our own ignorance, as settlers, to make sure that we became complicit.

But now, this ignorance was weighing too much, making it quite difficult to enjoy being in that skin. I had to shed. And keep shedding. At least for a while.

The next step to do so was a call to look closely at the issue of the Missing and Murdered Indigenous Women and Girls. Just that sentence had too many words that should not have been written side by side. Missing Women? Murdered Girls? Murdered Women or Missing Girls?

How come I knew more about the wars, the killings, the violence all around the world and so little about what was happening in my own country?

So when I listened to the Public Forum, held on April 4 in Ottawa by CBC-The Current, I felt heart broken: so many microaggressions, so much systemic racism, so little care and respect from all, or most, anyway from too many Canadians. On a daily basis. 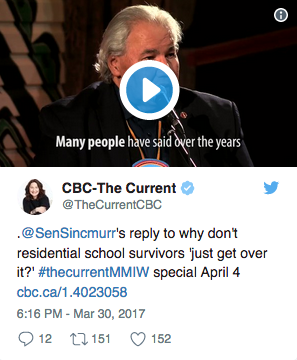 The heart broken part of me, who didn’t want to be shattered, had to do something to process these overwhelming revelations.

A first step, but not enough. Really not enough. I couldn’t stand still. I needed something, anything, to express my indignation, sadness, resistance, support. To answer to this… this awful “Just get over it.” Because I knew about this one. I knew why they could not get over it. I knew it because I had been told, and still was, the same thing again and again through the many years of my disability.

trauma is all about people living under social conditions where terrible things are allowed to happen, and where the truth cannot be told
– Bessel van der Kolk

This is why they could not get over it, because the truth had not been told, and the social conditions were still allowing those things to happen. Because to get over it, meant that it was past tense, while in fact they were dealing with it in the present.

And in the present, the only thing I could do was to create from a soul perspective. But as I was manifesting all this into texts and images, a doubt rose into my consciousness. Was I doing something useful or was I taking charge as a settler who knew better? Was I creating a solution or was I contributing to the problem?

Before making things worse, as my state of emergency was calming down, I decided to put everything on hold. To further investigate. And mature.

The intentions behind this piece:

Earth/climate exhibit/performance grandmarieandthegirls healing heart/street art holy days in the times of Covid19 mapping my disability mask my mantras/my practices those others trauma unsettling the settler within we who care who take care what I am listening to
Loading Comments...
Comment
×
%d bloggers like this: