February 14, 2017 – V-Day | a global activist movement to end violence against women and girls

Because this new call had created within, a desire to bridge what I knew with what I didn’t even know that I didn’t know, I started to look where I wasn’t used to. Accepting the fact that it will be uncomfortable, even difficult at moments. Stepping out of any false, oppressive, simplistic worldview or belief will be. Evolution has its toll. So decolonization. But I am one of the many who believe that the truth, even the most distressing one, is better than any lie, because it is the only stance from which you, me, we can create a lasting, loving, healed, shared humanity.

This Valentine’s Day, Missing Justice calls on Montrealers to honour the lives and memories of women and two-spirit people who have been lost to gendered and racialized violence through a flashmob and community dinner. Through this action, we commemorate women of all backgrounds, giving emphasis to Indigenous women who are the disproportionate targets of this systemic violence. We’ll hear about how the National Inquiry on Missing and Murdered Indigenous Women is going.
– genderadvocacy.org

Following this train of thought, instead of celebrating Valentine’s Day within a more than narrow consumerism vibe – which didn’t mean that I couldn’t be disruptive and creative around it – the gender advocacy’s call was closer to my own sense of emergency about our ways of living, of interacting with one another, with All There Is. Chocolate was not going to be a solution, not even a distraction, to mend my spirit at this point.

My heart was living with an old spasm, reinforced by the bigotry, I should say the open racism, misogyny, religious fanaticism, gender discrimination, cruel ableism that were reinforced since the new US presidency. There were days where my breath was so short, it was hard to keep imagining myself being part of the mainstream thread, unless…

circling around the fountain in the center of Complexe Desjardins, walking among the many women, girls, boys and men present. Among the marginalized. Those who resist. Among those who refused to accept that systemic oppression and violence are the way things work. The way colonialism, patriarchy, imperialism, yes, but Life, no. 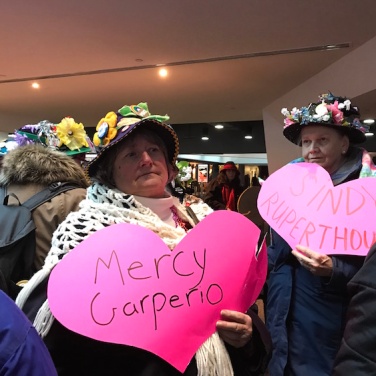 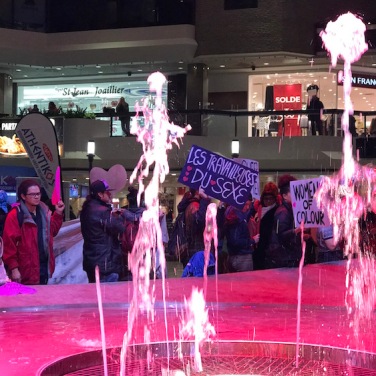 As the flashmob ended, and everyone was walking toward the Native Friendship Centre for dinner, speakers and performers, I found myself side by side with Nakuset, the executive director of the Native Women’s Shelter of Montreal, and wondering: Would she be willing to answer some of the too many questions overwhelming me since I realized that I was long overdue for a care and take care humanity upgrade; or the possibility that she already had her hands full, and to have to educate another ignorant settler had no appeal to her?

“Can I ask you some questions?” A warm smile was her answer. “What is the situation among missing and murdered women, I have heard about it in the media, but I am convinced that they just don’t tell us the whole truth?”

As she gave me a more detailed account coming from her direct experience, I notice that the tone of her voice was getting sharper. Did I notice it because it made me feel uncomfortable? Yes. But why can she be angry, or anything of the sort? The women and girls she was talking about was not number on a statistic sheet, there were people from her community. What did I expect? A lectured on the latest hot topic by a neutral witness? Before engaging that conversation, the primary question to myself should have been: Am I willing and ready to deal with the harshness of the truth, and the full range of emotions and reactions that come with it?

And then, just as I thought that the list of the numerous atrocities against Indigenous was completed, she added : “You will hear about it in the media tomorrow, there are also the children of the 60’s Scoop.” The 60’s Scoop? She is one of those children. Taken from their home and put into adoption as far away possible from their family and community. Many provinces far away, in her case. I was shivering. “If I understand correctly what you are saying, it must have been so devastating. You were there, by yourself, not even in a community with your peers, like in the Residential School?” I was the one who was getting mad now. Pissed. I was raised to not swear, but since I have been witness to these stories, to the truth about my own national colonial history, both French and English, fuck and shit had become a necessary and welcome part of my vocabulary.

We both kept walking in silence until we entered the Native Friendship Centre. And in this silence what came up for me was, how much I was grateful to Nakuset for this robust conversation. She didn’t put my heart at ease, but she did answer my latest prayer : “Can I see the world around me for what it is?” And even though this was not the only side of reality, it was a big part of our shared shadow as we were starting celebrating Canada 150 and Montreal Alive 375. A shadow I needed to face, if I wanted to be part, to collaborate in the design of upgraded worldviews and transformative ways of living. Of being and becoming.

ancestors Earth/climate exhibit/performance healing heart/street art holy days in the times of Covid mapping my disability masks my grand-little-ones my mantras/my practices those others trauma unsettling the settler within we who care who take care what I am listening to
Loading Comments...
%d bloggers like this: