A week has passed after the Women March on Washington, and its corollary in Montreal. But is its momentum has also passed? 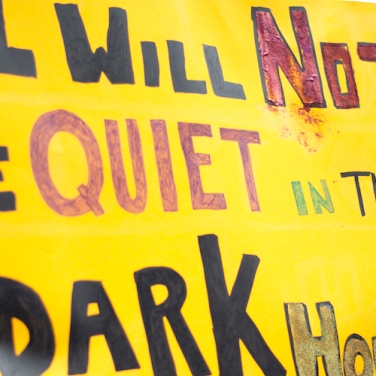 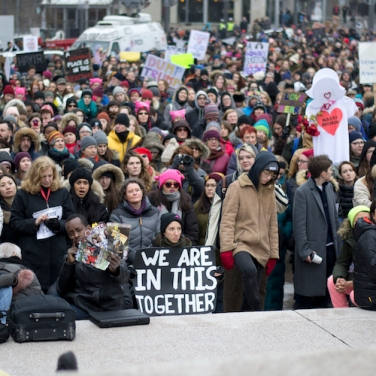 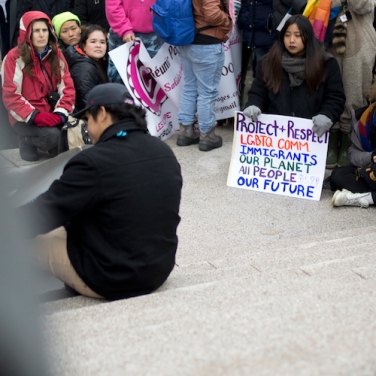 In the short term, Saturday, people in US have shown up, fiercely and in numbers, against the ban of Muslims at most of the international airports of the country. Today, massive demonstrations have been held once again all over the US. Michael Moore reports in a tweet : 1 thing is crystal clear: Last wk’s Women’s March NEVER ended. It continued all wk, fr SaltLake 2 Atlanta. It has not ended. It will not end. And here, we have been on Tweeter and Facebook, following in direct what was happening and reporting the important news, the calls to action on our treads.

In the long term, we have returned to our daily life and occupations, work, family, poverty, sickness. But discussions are going on. Discussions on how can we sustain, create a psychoactive tread within each and every one of us, so that, even though these bigger issues will not always be at the forefront of our awareness, they will become and stay part of our global, organic, intersectional perspectives?

What kind of spirit can we explore and cultivate so (s)he would nurture our lives and sustains our thoughts and actions as we fight, debate, co-create, grow, give birth (1) to a new needed level of reality? A conscious one that takes care of All there is, relating, protecting, respecting, involving the whole shebang from which Life is made of : everything and everyone; uniqueness and diversity; visible and invisible; past, present and future; light and shadow.

Because no doubts, when someone or anyone perceive things as separate, it is easy to treat them as objects, as if they were at our disposal. So we also need to become aware and take action every time living things –  animals, plants, minerals – or people – women, children, gay, trans, Indigenous, Muslim, Blacks… who were used as commodities throughout history and still today – are treated as objects. Because in the end, from that perspective, objects don’t matter, so we can exploit them as we wish; or we give them such an icon status that we end up spending more attention and money on them then the basic, vital and urgent needs of the chronically ills, the homeless, the migrants.

To give birth to this new level of reality, we need to show up as never before, on a moment to moment basis, and resist to any and every form of exploitation, lies, humiliation, gross ignorance, abuse, war, discrimination, annihilation. But we also need to learn to respect the sovereignty of every sentient beings, and learn to be in an active and practical relationship with them. We need to learn from one another; to be able to welcome and hold many different perspectives at the same time; to be exposed to the different perspectives that have emerged through many generations, civilizations, nations; to honor the different ways of living, worshiping, envisioning, co-creating life.

We need to care, to take care as never before.

And with all that has happen recently, it seems that we are already doing it.

As for myself, and as a part of those taking action, naming abuse, violence, injustices, taking care of those without privilege, I am healing from my own history of chronic illness, abuse and violence, as I am witnessing this world changing, evolving toward more consciousness, more sharing, more compassion (2). As if we were truly seeing one another for the first time, or at least for a very long time, listening very carefully and acknowledging the painful and wonderful sides of each and every one stories. And being there for one another.

(1) on give birth to a new needed level of reality, listen to Valarie Kaur talking about “This is the darkness of the womb, not the tomb…”

(2) on compassion in action, here’s 2 videos worth seeing of the mayors of New York and Boston who are taking a stand against the band of Muslims.