Today it is the Mexican Day of the Dead, and I take the opportunity to put in perspective nearly three decades of chronic disease, of living in a state of survival, to set up intentions so that, in the years to come, I will be able to create and experience a new reality. While going to bed  with those reflections, I wake up the next morning with an affirmation and a few questions. I write them down on 8″ x 8″ Post-it, that I stick on my wall. 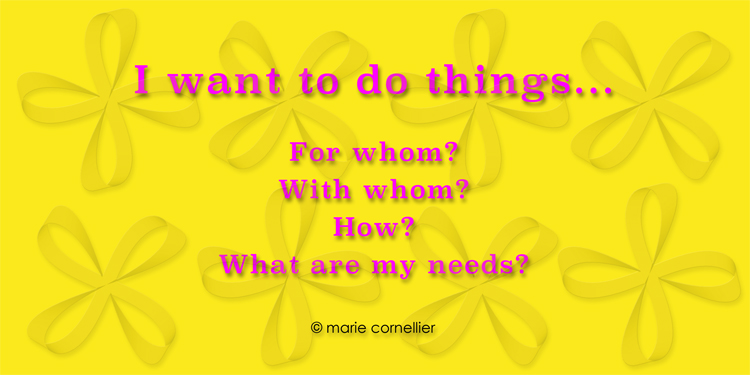 To really get into the process, I take the next few days to write down what comes to my mind, my heart. At night before bedtime, I ask questions which seem to elude me during the day. And to help me shape the shapeless that is trying to come to light, I read “Women Who Run with the Wolves”, from Clarissa Pinkola Estés.

Those days are intense, the people I meet, the thing I do, keep bringing to my consciousness, memories, emotions, desires, happy, nightmarish, or unsettling ones, many of which were buried in my depth for ages. But I make sure, first, to welcome them as they arise, with no judgement, focusing on listening, taking notes, before I will start discerning between the things that are no longer serving me, the ones that are still driving me only by the force of habit, and the things that have become, through trial and error, through experimentation and practice, essential for me. The things that I want to be the fabric of this new reality.

For sure going through all of this, to keep this quality of mindfulness for so long, is quite demanding. I now have to really, really pay a loving attention to my daily needs.

Then, as I believe things are slowing down, wrapping up, since I have come around most of what wanted to be express, I am sent into a whirlpool of experiences.

For whom? everyone & everything; the planet; my son & his family

Monday morning, I wake up and without any specific reasons, I go through my Facebook thread, which is unusual at this hour of the day, and I see a post from my friend Katrin who is joining a march, at lunch time downtown Montreal, in solidarity with the people of Standing Rock. She has build for the occasion more then 30 signs, mainly using Isaac Murdoch beautiful art to protect the water. I take my phone : Can I join you?

To demonstrate, against injustice, for the protection of the planet, has become one of roles as a grand-mother. The first time I was called upon, was in 2012 when my son phoned me and said : “Mom, today there is a student demonstration to oppose rising tuition. Since I am working and it will be impossible for me to go, as the grand-mother of L., could you be there for her?” After such a compelling argument, my whole being was so happy to be of service.

Today we are hundreds in the street, to support the people of Standing Rock against the Dakota Access Pipeline, to denounce the violence against their peaceful protest, to back their demands because this project threatens their way of life, their water, people and land. 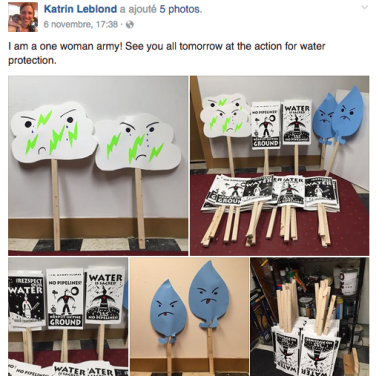 I am a one woman army! See you all tomorrow at the action for water protection.- on Facebook © Katrin Leblond 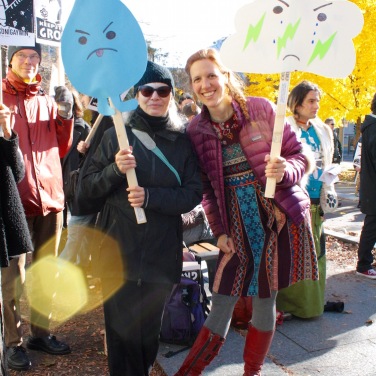 me and my friend Katrin © Itzayana Gutierrez 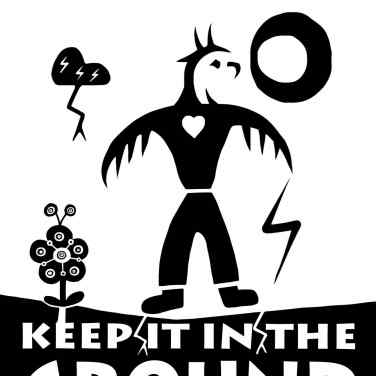 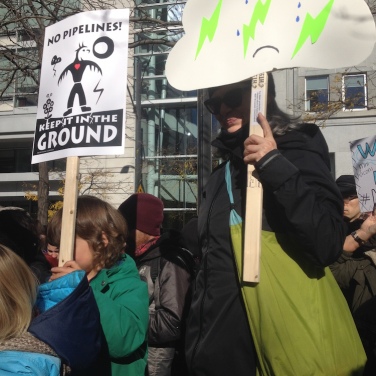 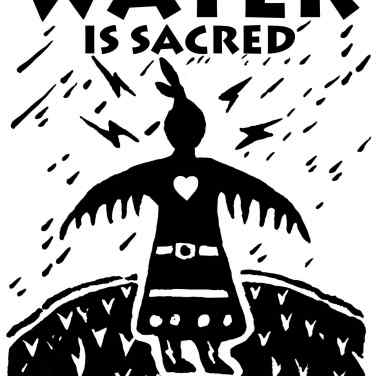 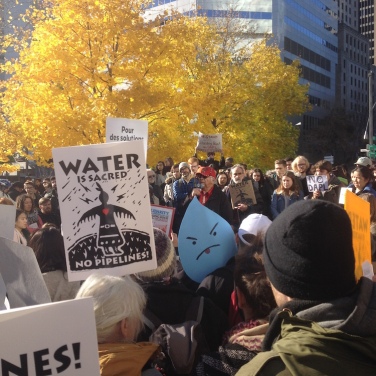 How? by strengthening my practices; by writing & creating

There is a crack in everything…

What are my needs? to contribute in the limits of my capacities; to feel part of the whole

On Remembrance Day, my friend Kaï goes in front of Leonard Cohen’s house in Montreal to pay his respects. He does this video and post it on Facebook. Three minutes later I am chatting with him, which make me feel as if I am there, even though I am at home resting because of a bronchitis.

November 12, 2016 – the US presidency elections results

It has been a few days since the shock wave has been felt all over the internet.  After listening to many comments, reading many posts on the topic, I need to go into meditation to let the news sinks in. Really sinks in…

What are my needs? to feel part of the whole; to contribute in the limits of my capacities

Today I am joining another gathering in favor of water, and in that spirit, opposing the Dakota Access Pipeline, and the Energy East Pipeline here in Canada. It has been called for 1 pm at the Square Phillips, downtown Montreal, but it is 12:30 and there is no one. After sitting outside for a while, I decide to go warm up at the Christ Church Cathedral just across.

As I come in, I see that there is a church service at the moment, so I prefer to stay at the back and enjoy a short meditation. After a moment, I find myself very distracted by the words of the officiating priest. I try to go back to my meditation, but there is something that won’t let me. So why fight? As I keep my breathing in awareness, I start paying attention to his homily. The more I listen, the more I want to hear. In my words, he is acknowledging that this week was a very difficult week, distressing and challenging us in our deepest values with all those racist, anti-women, anti-LGBT comments. He reminds us that political institutions are impermanent, as much as religious institutions, but what is not is God’s presence.

I am startled by those strong statements, I have to admit I was expecting more something like : He has been elected so let see, let’s give him a chance.

No, this priest, this man, is welcoming what many of us have felt since the US presidential election. He also reminds us that these political struggles have limited powers, in fact.

That there is something more permanent and more powerful within us : God, Allah, Buddha, the Universe, the Creator, the Essence of Life, the Noosphere… whatever we want to name this Something bigger than ourselves.

Something that is calling us to take action in favor of the Living, of All There Is, beings, plants, animals, the planet. The visible and the invisible. Matter and Spirit.

At least, this is how my heart is translating his compassionate voice, his caring presence.

It is time for me to go back to the gathering and, because a certain shadow has been lifted from me, it is with a more peaceful heart that I am holding the hands of my two neighbors and take part in the round dance that is beautifully led by a couple of indigenous drummers and singers.

What are my needs? to rest, to replenish

I need a break. I really need a break. To observe, to pay attention while I am engaged in all those events is quite demanding. I am out of breath. And because I want to be coherent in the mist of this transformative chaotic time, I have read, watch, non stop, what was available on what we are doing collectively, what I do personally, to be in this mess.

I need to shake up this state before I feel overwhelmed. And tonight, there is just what I need.

The Comité des citoyens du Mile-End – the citizens committee of my neighborhood – is showing the movie Demain – Tomorrow. And it seems that I am not the only one that feel the urge to learn about the problems, but, most of all, to focus on the solutions, which what the film does, since 750 people have showed up, a record attendance for the committee.

Observing my short breath, the downsizing of my motivation, I realize how much, even though deconstructing a situation is necessary to understand its patterns, beliefs and repercussions, it can become too much since you can always deconstruct further along the way. And in my experience, this often leads to feelings of hopelessness, disempowerment, and the tendency to dissociate, to zone out, to act more and more unconsciously and look compulsively for distractions or mindlessly consume.

There is a moment when you have, or at least I have, to start looking for reconstruction. To believe and get involved in new paradigms, since the future is not something predetermined, but something to create.

What are my needs? to sooth my sadness, my discomfort by engaging with others

I am very grateful for the Shiva – mourning – for Leonard Cohen organized in my neighborhood Chavurah. Very grateful that I will be paying my respects in an intimate and secure environment. As I enter the room, there are friends, ceremonial food, and people that I don’t know. But I don’t mind, because from my experience, sometimes you can feel closer to a stranger with whom you were able to be authentic, vulnerable, than to your close ones.

As a friend of mine is singing a very touching Hallelujah, I feel compelled to say a few words.

So you know, I come from a very French Canadian background, a Catholic background, but as I was saying earlier to someone at my table, Leonard Cohen was as part of my culture as he was of the Jewish, or the English culture. In this regard, he was cross-pollinating us. So here’s three short memories that come to my mind.

On Remembrance Day, as I was chatting with a friend who was paying his respects in front of Leonard Cohen’s house, I wrote him: It is as if Cohen is playing the Sacred Trickster, by reuniting us around LOVE, helping us after what happen this week, by keeping us together, instead of all alone, feeling overwhelmed, hopeless. Hallelujah!

In 2012, I was at Île-de-la-Madeleine, in the wonderful Café de la Grave, listening to La Démesure, a local group who was playing a mixture of Cohen, Desjardins, Dylan and Renaud. Even though people sang with them from time to time, it was only until the singer Clément Cormier ended the show with Hallelujah, that the whole room literally became their choir.

For a while now, it has been my intention to write, but writing implies that you become public, and I have a problem with that. As a child, I was surrounded by many public figures. Giants. Giants, not necessary because of their achievements, but because they were tall, and I was, and I am still, short. Many of us have their own excuses to avoid doing what they intended to do, this was one of mine. But six or seven years ago, as I was walking on Saint Laurent Boulevard at the corner of Le Parc des Portuguais, I realized that the man in front of me was Leonard Cohen. I don’t know if it was because he had shrunk a little with age, I know I am, but I just tough : Wow! he’s short. He is even tiny, and he did it…

So you know, I am writing now.

Earth/climate exhibit/performance healing heart/street art holy days in the times of Covid19 mapping my disability mask my mantras/my practices those others unsettling the settler within we who care who take care what I am listening to
%d bloggers like this: